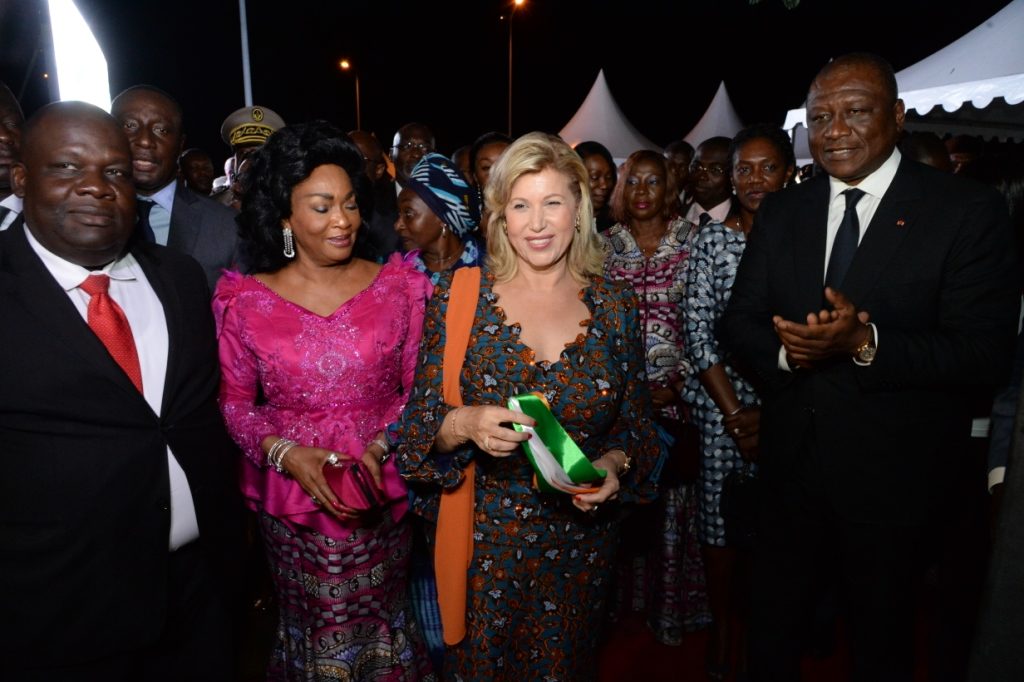 The First Lady, Dominique Ouattara, inaugurated an urban park and a fountain bearing her name on Wednesday, October 09, 2019 at Riviera 3 in the commune of Cocody.

The infrastructures were built by the Ministry of Equipment and Road Maintenance in partnership with other subcontracting companies, it is located near the Jacques Prévert roundabout in the municipality of Cocody. The objective is to offer to the people especially children, a beautiful place for meeting and relaxation.  It aims also at contributing  to the fight against global warming.

The Dominique Ouattara urban park was built on an area of 11,000 m2, and includes six (06) different spaces, as well as a magnificent central fountain. These areas consist of a 400 m2 covered pergola, a 200 m2 river bank, a 500 m2 playground, a 350 m2 covered amphitheatre, an 800 m2 skatepark and a 500 m2 sports field with a capacity of more than 1,000 people.  As for the fountain, it consists of a circular basin of three (03) levels. The pools are decorated with luminescent water jets that can range from 4 to 12 metres in height.

The inauguration ceremony witnessed the presence of Mrs Clarisse Duncan, wife of the Vice-President of the Republic, Mr Hamed Bakayoko, Minister of State, Minister of Defence, Mr Amédé Kouakou Koffi, Minister of Equipment and Road Maintenance, Mr Patrick Achi, Secretary General of the Presidency and several other personalities.

Mrs Dominique Ouattara, First Lady and godmother of the event, welcomed this project which brings  fun and entertainment.  The inauguration of this park shows the importance the Ivorian Government attaches to the well-being of its citizens in general and children in particular.  “The opening of this play and recreation area shows the importance that Côte d’Ivoire attaches to the development and well-being of our children.  Indeed, it is essential to preserve green spaces where everyone can relax and enjoy nature,” the First Lady said.  She also required that access to the park be free for all. According to Ms Dominique Ouattara this space offers activities designed to relax and entertain people, especially children. “I hope it will also be a meeting point to create and share links between people,” she added. To conclude, Mrs Dominique Ouattara revealed that the District of Abidjan has kindly agreed to maintain and manage this park on a daily basis.

For Mr Amédé Kouakou Koffi, Minister of Equipment and Road Maintenance, the construction of places such as the urban park is initiated by the Ivorian Government to improve people’s living conditions in the face of issues such as population growth, global warming and many others.  Dr Amédée Kouakou Koffi also took this opportunity to commend the commitment of the First Lady for the well-being of children and populations.

Séa Jean Honoré, Vice-Governor of the District of Abidjan welcomed the achievement of the project. For the latter, its implementation is in line with the vision of the Abidjan District to improve the living conditions of its people. Before he ended, he expressed his congratulations to the First Lady for her efforts to protect the welfare of  children in Côte d’Ivoire.

Jean-Marc Yacé, Mayor of the municipality of Cocody, for his part, was pleased with the inauguration of these facilities, which will enable his residents to enjoy a healthy and pleasant environment.

The young Bassa Kouamenan Enoch, spokesman for the children, did not hide his joy, and promised that the young people of the commune of cocody will take good care of this beautiful place every day.

It should be noted that the First Lady also offered cash donations worth eight million CFA francs to the people.

The inauguration ceremony ended with a guided tour and a cocktail offered to the many guests.